For more information on the upcoming 2016 IBU World Cup Biathlon at the Nordic Heritage Center on February 11-14, 2016 please click here.

Be sure to check out the 2015 Nordic Trail Festival this weekend, July 31-August 2 at the Nordic Heritage Center! Click here for more information. 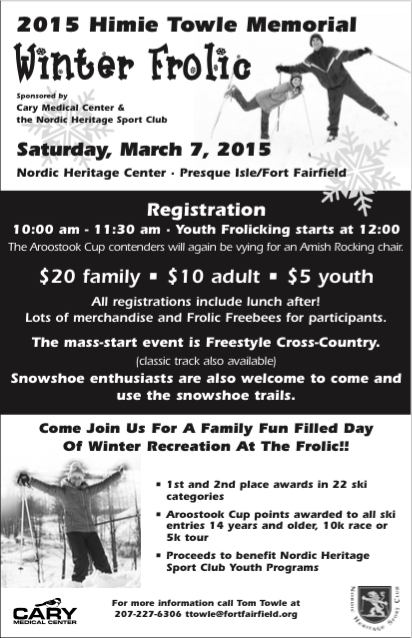 The 2015 Youth Ski program is off to a great start! All kids from Kindergarten through 8th grade are welcome to join us Saturday mornings from 10-11:30 to have some fun on skis and then warm up in the lodge with a healthy snack and hot chocolate.

The Youth Ski Program is made possible by generous donations from NHSC members and The Aroostook Medical Center and is free to all.

PRESQUE ISLE – The first weekend of August played host to brilliant sunshine, blue skies and record crowds at this year’s Nordic Trail Festival.  Held annually at the Nordic Heritage Center in Presque Isle, the Trail Festival is a celebration for anyone that enjoys the trails at the facility, and the community surrounding those trails.  The weekend plays host to races, games, live music, food and much more.

This year the event kicked off on Friday, August 1st at Quoggy Jo with a downhill mountain bike race and a festival-favorite, the mini-bike championship.  This event has adults racing around a small obstacle course on small toddler bicycles to the cheer of the surrounding crowd – setting the stage for a weekend more about laughter and camaraderie than fierce competition.  Once again this year, it proved as entertaining for spectators as for racers.

Saturday brought festival-goers to the Nordic Heritage Center stadium for biking and running biathlon races, youth trail races, kid’s games and activities, and the main event, the 6-hour trail races.  In these events racers compete solo or as teams to see how many laps they can complete on a running or biking course in 6 hours.  This year the participation exploded with nearly 130 total competitors split almost perfectly between runners and bikers.

“We’ve seen more participation than ever this year,” said event director Mike Smith, “from both local residents and those travelling from outside the region.”  The Trail Festival brought participants from as far away as Quebec, Nova Scotia and Boston, while also capturing the most participation to date from local trail users.  “The volunteers that run this festival are committed to making every year better than the year before,” said Smith.  “It’s safe to say we’ve reached a tipping point, and the word about our festival is out.  Everyone I spoke with over the weekend made the point of telling me they would be back next year and would be bringing their friends”.

This year the event also served as a fundraiser to help purchase special cross-country ski equipment for those with physical disabilities.  The Nordic Heritage Sport Club, in cooperation with UMPI and an organization known as Maine Adaptive will be working to bring adaptive cross-country ski programming to the Nordic Heritage Center this winter.  This programming will be offered to those in the surrounding communities whose physical restrictions may previously have kept them from enjoying the facility and the sport of skiing.  The festival helped generate awareness and support for the project, and proceeds are going towards the cause.

The Nordic Trail Festival has found a unique foothold in the busy summer calendar of Aroostook County.  Bringing together an eclectic mix of competitors, recreationalists, families, visitors, events and culture, it’s easy to see why the weekend has become a sought after experience throughout New England and one of the premier grassroots festivals in Northern Maine.

For more information on the festival, links to photos and video from this year’s event, and a complete listing of results from the races visit www.nordictrailfestival.com.  “Put July 31st to August 2nd on your calendar for next year,” suggested Smith, “planning has already begun.”

August 1st to the 3rd, the Nordic Trail Festival is back!

Our annual festival returns this summer with even more action!  August 1st to 3rd the Nordic Heritage Sport Club will proudly host the Nordic Trail Festival, a celebration of community, trails and lifestyle.  This year’s festival is also serving as a fundraiser to help bring Adaptive Programming to our community.  Your support will help us offer youth and adult adaptive nordic ski programming this coming winter!

Whether you want to tackle the trails for a full day of running or biking, or relax and take part in a variety of events, this weekend should not be missed.  Enjoy live music, games, contests, food, racing and the awesome trails of the Nordic Heritage Center, all with the spectacular backdrop of a Northern Maine summer!

The Nordic Trail Festival is open to all ages and ability levels and spectators are welcome to come and enjoy the event. Volunteers are also needed – email us at info@nordicheritagecenter.org for more information.

Join us for group mountain bike rides on Mondays and Wednesdays at 6pm.

Mondays: Meet at the lodge

Wednesdays: Meet at the road trailhead

For more information contact Chad McPherson at trailetr@gmail.com or Tom Chasse at tomsharo@yahoo.com or stop into Bike, Board and Ski.

After almost two years of planning, countless hours of volunteer effort, and a busy winter of preparation, the IBU Youth / Junior Biathlon World Championships are set to begin TODAY.  Visit the Nordic Heritage Center today through next Friday to watch the best young Biathletes in the world take the stage here in Aroostook County.  And of course, cheer on Team USA!!

For those looking to ski or snowshoe in the coming days, please note: All trails other than the competition trails / stadium are OPEN.  To access those trails you must park at Quoggy Jo and hike / ski over the mountain, or park in the limited space at the Pet Loop trail head.  Please obey all trail closure signs posted near the race courses.  Your cooperation and support is appreciated.  Enjoy the excellent trail conditions!

Greetings skiers and snowshoers!  As we ramp up towards the start of the World Junior Biathlon Championships, major construction and venue set up is taking place in the parking lot at the Nordic Heritage Center.  For this reason, the upper parking lot will be closed beginning on Friday, 2/21/14.

The trails will remain open as posted (competition trails and stadium are closed from 6 AM to 3 PM daily), for several more days, however we ask that you access these trails via Quoggy Jo or the Pet Loop parking area.  Thank you for your cooperation and support.  Enjoy the excellent conditions as we head into our last week of February!